Welcome to my personal website. This page has some info about me, in case someone stumbles upon this on the web.

My name is Vasilis Georgitzikis, but since this is hard even for Greeks to pronounce, most people just call me Tzikis. Feel free to do so too. 👍

I'm a Computer Engineer, open source geek, who turned over to the dark side and became an entrepreneur.

In a past life, I've done some freelance web development (back in the dark ages of Joomla). I've also dabbled in a ton of technologies, from iPhone development, to CUDA, Embedded Development & IoT. I've even done my share of SysAdmin work (shudders).

Perhaps more importantly, I was a Researcher for the EU for a couple of years (while still a university student), with quite a few publications on what would later be called Internet of Things.

Seriously, what are you up to now?

Lately, I've switched over to business, starting with my first startup, codebender, the world's first Cloud-based Arduino IDE. We started it in 2012, raised around $1M of funding (which was almost insane for a Greek startup to do at the time), and then sold it to another internet company.

After that, I was a Special Projects Lead for Resin.io (now Balena), handling all the hardware and crazy projects, from project management, product design, hardware evaluation and supply management, and reporting directly to the CEO. So, jack of all trades (and master of none?).

After that we started an IoT startup (Spanner CI) with a couple of friends, which had to shut down because of lack of funding.

And right now, I'm taking some time off! Which means I have lots of free time, so feel free to hit me up if there's anything I can do for you! 😁

That was the basic gist. If you have time to kill, keep reading for some extra random info.

One other claim to fame is that I was the co-founder and active member of P-Space, the first Greek hackerspace - in Patras, Greece. This led to us creating a couple of widely acclaimed Open Source Projects, building one of the firs 3D Printers in Greece, and even appearing on Greek national TV a couple of times. Needless to say, they were some of the best days (well, nights) of my life.

Before that, I was a member of Patras Linux Users Group, where I frequently presented Open Source technologies, and even wrote at national Linux publications, such as Linux Format & Linux Inside.

I've also spoken to more conferences that I can count, from FOSDEM & FOSSCOMM (which I also co-organized in 2011), to workshops at MIT, to mentoring for Facebook. And I love teaching, so hit me up if you want me to talk somewhere!

As an Open Source enthusiast, I've created and contributed to a list of open source projects. Here's a rough list:

IEEE Gold Athena Summer School (2011) - Presented mkSense, a network stack for enabling cross- platform 802.15.4 networks, and how to use Arduino and XBee modules for wireless communication.

IEEE DAY 2012 - IEEE T.E.I. of Messolonghi Student Branch (Oct 10 - 2012) - Presented the Arduino platform, our contributions to the Arduino code, the codebender project, and hosted a workshop on Arduino development.

Wow, you made it this far! Here's a crazy old photo of me for your amusement. 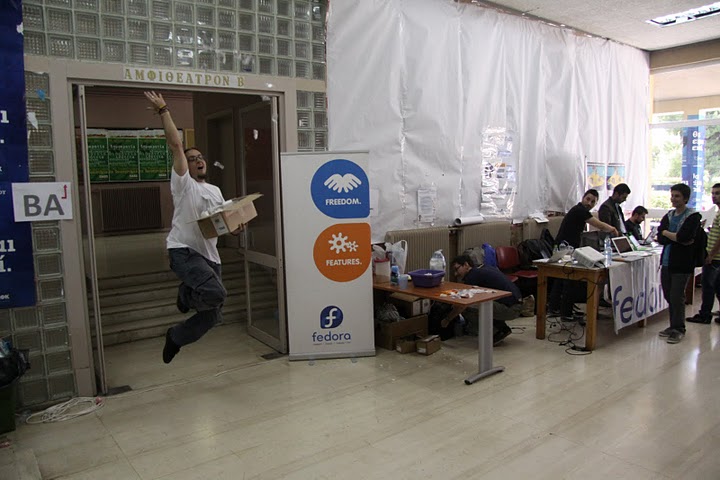